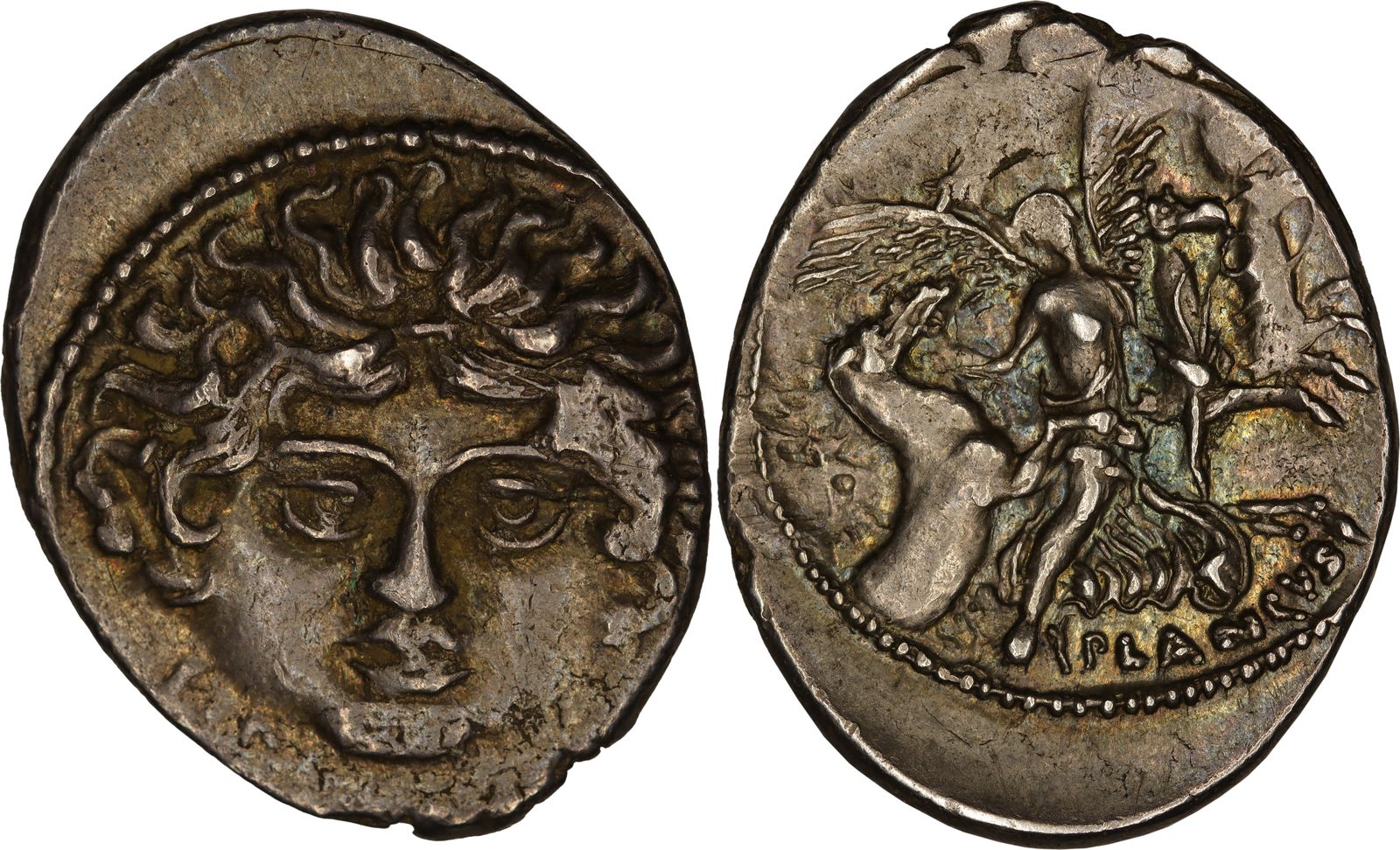 Sold to a Brisbane Gentleman, and is now part of an extensive Ancient Roman Collection.

The Goddess Victoria, or ‘Victory‘ in English, was the personification of victory in all forms, and was the Roman interpretation and equivalent of the Greek Goddess Nike. Although the concept of victory was important to both cultures, it’s clear from the differences in level of portrayal that Victoria held a far higher standing in Roman culture then that of Nike to the Greeks. Although the Ancient Greeks of the late Classical and Hellenistic period did portray Nike on their coinage, she is often an accompanying figure to a second, central figure, and in many cases she is a small figure being held by Zeus, ‘Zeus Nikephoros’, or Athena, ‘Athena Nikephoros’. On the other hand, Victoria appears to be a major part of Roman society with multiple temples erected specifically in her honour, and with frequent portrayal in jewelry, architecture and other art forms; importantly and in comparison, Victoria is very frequently portrayed on Roman Republican and Imperial coinage, similiarly as an accompanying figure, but also often as a central figure, such as on late Roman and early Byzantine gold solidii. An explanation for this difference could be by the slight differences in their spheres of influence – although each deity personified victory in all forms, Victoria also represented the reasoning behind who would be victorious during war, and as a result victory over death itself (the act of resisting Mors, the personification of death itself). On the other hand, the Greeks tended to associate the concept of why one was victorious in battle with the concept of wisdom and strategy, concepts personified by the Goddess Athena – he who had the blessings of Athena would be deemed the victor. This idea is also corroborated by how important Athena was in Greek society, and the pervasive portrayal of the deity in art, architecture and coinage.

Struck at Rome in 47 BC in the name of the Lucius Plautius Plancus, a Roman Republican moneyer, this Silver Denarius is a perfect example of Victoria on a numismatic piece – featured with her wings spread in full splendour, she conducts a triumphant quadriga in which she is often presented with. The unusual elegance displayed by the reverse has led many to believe it to be a re-interpretation of the famous artwork aptly named by the Romans as ‘Victory in a Quadriga’, a painting by the ancient Greek painter Nichomachus of Thebes in the 4th Century BC. It is strongly believed that ‘Victory in a Quadriga’ was in the possession of the Plancus family at the time this Denarius was struck, as the painting was moved to Rome, amongst many of Nichamachus’ other paintings, in 43 BC by L. Plautius Plancus’ brother, Lucius Munatius Plancus, during his victories in Gallia. Although the coin itself is captivating in its own right, the design is all the more important as the original painting has been lost to time; many of Nichomachus’ paintings are interpreted through the works of those that came after him.

Although Lucius Plautius Plancus is mostly known as a moneyer during the Imperatorial period, his brother left a far greater legacy. Lucius Munatius Plancus served in many political positions during the turbulent time of Imperators, most notably as Praefectus Urbi under Gaius Julius Caesar in 45 BC and as proconsul of Gallia Comata in 43 BC after Caesar’s assassination. Plancus revealed himself as a master of non-committance and is most famously known as one of the classic historical examples of men who have managed to survive very dangerous circumstances by constantly shifting their allegiances. He is one of the very few important Roman historical figures whose tomb has survived and is identifiable, although his body has long since vanished, and his funerary inscription attests an immense legacy in life. Of note, Munatius Plancus played a major role in the founding of Lugdunum (modern day Lyon), an important Roman city in the Gallic region and a major mint for extensive coinage series such as Augustus’ bull series or Tiberius’ Pontif Maxim series, as well as the city of Augusta Raurica, the oldest Roman colony on the Rhine river. Also, it is said that on the 16th of January 27 BC, Munatius Plancus proposed the title Augustus, translated as “revered one” in English, be granted to the Imperator Octavian; the title would adopted by Octavian and incorporated in his official nomenclature, becoming Imperator Caesar Augustus.